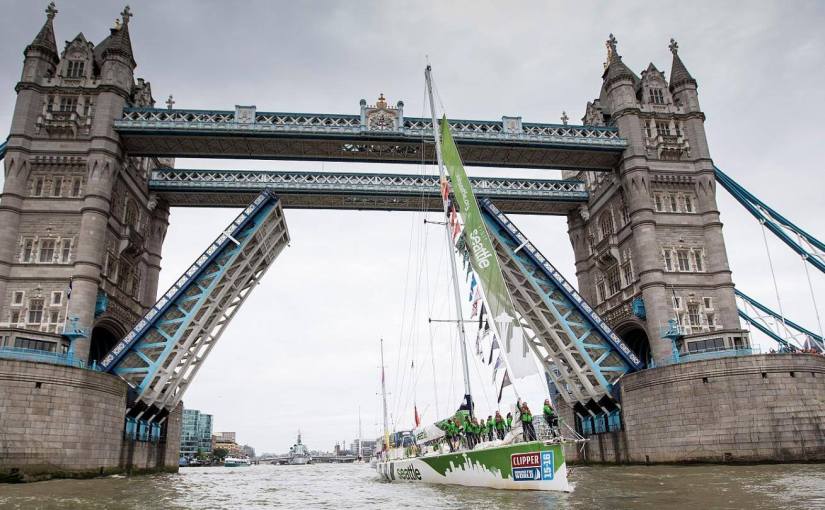 Ever since I signed up to this race, I knew that arriving into London would be pretty epic.

So many times I’d imagined sailing through Tower Bridge, but the experience proved to be far better than anything I could conjure up in my head. 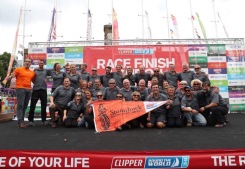 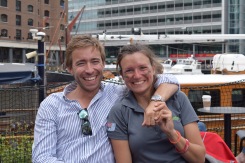 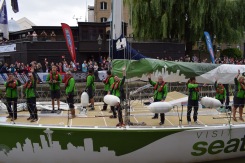 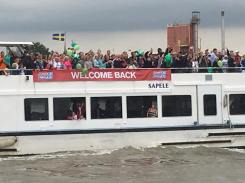 Seattle love on the supporter boats 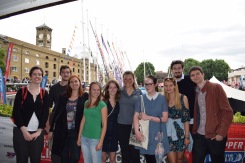 Tower Bridge. Again. Why not? 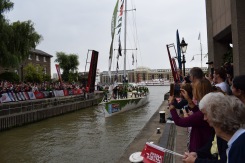 I love a good flag. Particularly this one. 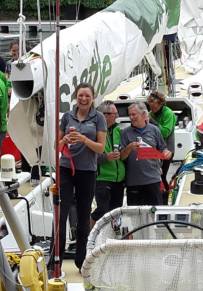 Lined up for the final time 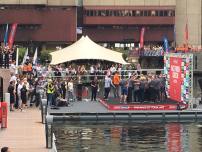 Off we go to the stage

Through Tower Bridge the first time

Onto the Champagne with Chief Cheese love and Whale spotter, Lucy

The reason why I should never be in a Clipper poster

BamBam, Shaw & Hartwell. Finally, Emily & Steve got to meet after many an indirect FaceTime conversation 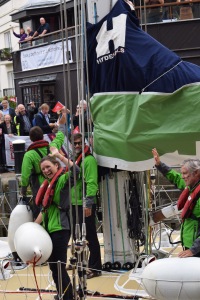 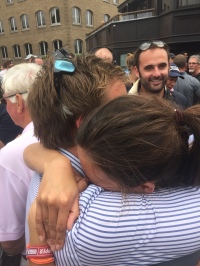 The party even had free photos

In my usual style, I was asleep during the pre-amble of arriving into London, but today was my final mother duty, so at around 7.30am, I was woken up to prepare brunch: a gourmet selection of cheese, cheese, meat, more cheese, fresh bread and crackers. Yum. As we prepared the meat & cheese feast, spectator boats appeared filled to bursting with supporters. On the boats it was easy to spot Visit Seattle supporters – just look for the green! Possibly the one advantage of our crazy leprechaun school uniform. And so the waving began.

At every arrival and every departure, we’d been practicing our finest waves. Now was the final time, the final time to feel famous on our little green boat parading up and down the Thames. The bank was lined with crowds as we approached Tower Bridge. Through Tower Bridge we then went waving, people stationed all over the bridge too. We continued waving as we returned through Tower Bridge (a pretty awesome experience) and then readied ourselves for the entry to St Katherine’s docks.

Generally, it was pretty difficult to make out who was on the bank; we just waved manically to make sure we covered all bases. Then I spotted a group of people, one of whom from a distance looked remarkably like my tall, pale, lanky, brother (love you Ry :D). Hang on…that was my brother! There were my friends and family all together holding a big brown sign with my name on it, jumping up at down. Queue my excitement going up a couple of gears. We then entered the lock to Taylor Swift, spotting more friends in the crowd as we motored in. A year after our team song was chosen from our Level 4 training, this was the final time we’d get to “Shake it off” on CV23 *sniff*.  Better make it a good dance then.

After mooring up, we had a few hours to wait before we could get off the boat as the rest of the crews had to arrive in before prize giving would begin. These few hours were mostly spent trying to wave at friends and family crowded on the bank combined with Champagne and…cigars?! Yes, only on Visit Seattle would Champagne and cigars appear. Clipper also wisely placated us by providing Pizza too, otherwise there was no way we were going to stay on those boats. Now it was time to find family in the crowd and finally, I could pick out my boyfriend Steve. After over 3 months of being apart, he was the person I missed the most. Yes, that was him, but I couldn’t talk to him, the distance between the boat and bank being just that bit too far. Luckily for me, it was only just over an hour or so before we processed up on stage. Before going up, we Leg 8 crew were joined by crew from previous legs, a huge number of the Visit Seattle family reunited to dance up to the stage together to our team song before our 8th position was celebrated. This was when we discovered that not only had we scored 8th place (pretty big improvement from the 11th place for the majority of the race) but that we’d also won the overall Stormhoek Social Spirit Award! This was the real achievement, what we’d really wanted to win. So much joy, so much excitement.

After our final famous moments on stage, we were released to meet our loved ones. That was pretty emotional. It was wonderful to discover how many people had made the effort to come out and see the finish, the only challenge being having the time to catch up with them all. Once we’d all caught up, people made their moves, myself, Steve, Kyrsten and Amy being left to enjoy the Stormhoek party laid on for Visit Seattle & supporters. It was then onto the final crew party for Emily and I for one last dance, our last time being “Ocean Racers” surrounded by fellow Clipper-people before we returned to the real world. Dancing, more Stormhoek wine, dancing…end.

The Clipper Race finish: the best day of my life…so far!