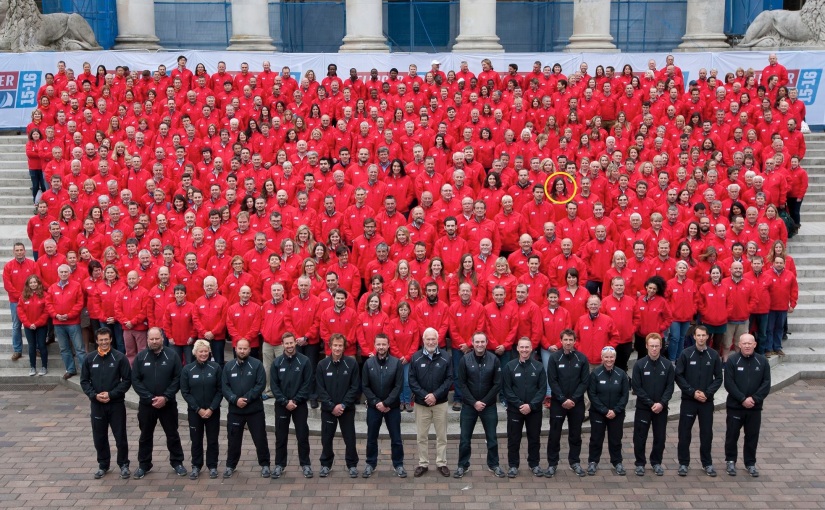 WARNING: This is a bit of an epic blog post for me. I’ve done the magic combo of gruelling exercise + delicious food so my fingers are ON FIRE!

Last Sunday, 500 or so people dressed in bright red jackets descended upon Portsmouth. 500 people all there to find out further details on the race route but most importantly, crew allocation. Who was going to be their skipper? Who was going to be in their crew?

I was just one out of these hundreds (that’s me, the one with the yellow halo. Should have worn a red & white striped hat). The excitement of this day had been building for me for quite a while. I was going to find out out who I’d be sharing a boat with during my legs of the race. I was also hopeful we’d find out the final ports planned for the race. This hope wasn’t entirely fulfilled, but I now finally know which crew I’ll be sailing with.

On arriving at Portsmouth Guildhall, it was great to see my Level 1 Crew again. I’d had to que for ages waiting for my photo to be taken only to be told I needed to wait until the end of the day, so it was nice to find a seat waiting for me reserved with my Clipper friends.

Red jackets on, we all sat at the back waiting to find out our crews. Would any of us be put together?

We first found out that the start of the race will be from St Katherines Docks in London, and most importantly for me, the finish will also be there! I always hoped that I’d get the chance to sail through Tower Bridge to a finish in London – sailing home near enough – and now it’s confirmed. If you’re reading this, I expect you to be there cheering please and not comment on how I smell after a while at sea.

Once the route had been confirmed (alas not the start ports for Legs 7 & 8), it was then the turn of the 12 skippers to each stand up in turn and read out the names of their crew. This was the really exciting and also really nervous bit.

Each skipper read out one half of their crew before moving onto the next skipper. The result was that those of us from L1 had to wait a pretty long time to find out which crew we were in as very few of us were mentioned in the first half.

Finally, our names were each read out and displayed on the screen. Turns out I’m the only Mia in the race. I’m pretty happy about that. Must be because no small children are allowed in,

I will be racing on Team Huw during the 15-16 Clipper Round the World Yacht Race. We don’t know our sponsor yet (hence the name Team Huw) but since my name was read out, I’ve met a great group of people that I’m looking forward to sailing with.

The rest of my L1 crew were spread across different boats, bizarrely, 4 ending up on the same boat!

Once the name-call had finished, we were all ushered off into our team rooms to talk team.

There were 33 of us there from Team Huw – all different nationalities, all different ages. Quite a few of the people there were doing the legs I’m on, so it was nice to meet people I’ll actually be sailing with. Huw then introduced himself and split us into groups so we could plan a) What our crew charter will be  b) How we want to be seen by other boats   c) What we expect from Huw as our Skipper.

It took a little while for us all to gel and get the thoughts going, but by the end we were coming out with some cracking plans. Standout things I’ve taken away from what my group discussed have to be: Boat Motto: “Fast & Fun”, Galley Rule No. 1: “Don’t let crap cooks cook alone” and finally, The Lego theme tune probably won’t go down well as crew song. Sad times.

After all that, we went for some drinks together at Gunwharf keys, following the stream of red clipper jackets all wandering that way. I had to leave fairly early to catch a train home, but it was good to start getting to know some of the others a little better. A midnight arrival back home and I was shattered, but crew allocation day totally lived up to my expectations.

This evening, it hit home to me how I’ve begun to learn a whole new language without even realising it. It came to me as I was sharing the dark arts of rowing with newbies at my rowing club.

“Start at the finish, then slide up to the catch”

“Bunnyhop for the first quarter of the slide”

“Get the split down but maintain the rate”

I’ve been rowing since I was a teenager, so all of these terms are deeply embedded in my memory. Its completely obvious what they all mean. Isn’t it?

Today, I was reminded how the rowing lingo I take so much for granted was like a whole new language to the people I was teaching. That it takes time to get your head around it and really understand what the terms refer to – just like it was for me during my first level of training for the race. The difference between rowing and sailing, however, is the SHEER QUANTITY of new terms you have to learn. Take the parts of the boat, for example. I used to think rowing could be a bit complex, but my perspectives have now radically changed!

I’m not the most patient of people so I can sometimes find it a bit testing teaching rowing. How our skipper and first mate had the patience to teach 10 of us how to sail a 68ft yacht from scratch I’ll never know!

The upside is that having recently learnt something completely new, I really appreciated today how patience and clear explanations from your instructor make a difference. It completely makes the learning experience (or breaks it – I hope I don’t find out on level 2!).

I’ve now just got to crack on with remembering and surely learning lots of new terms as part of this sailing experience. The top picture is a brain-dump of what I’ve learnt so far from just one week, although I’m pretty sure there is a lot I’ve missed off. My Level 2 training is now just over a week away so I’ll soon be back on board with plenty of time to practice it all again soon.

So, the first part of my Clipper race adventure is over! Last week, I completed the first of 4 weeks worth of training I have to complete this year.

20 of us arrived in Gosport last Thursday afternoon to be split into two boats.  I had fully expected it to be a pretty gruelling week having read other blogs. There were, however, a huge number of things I didn’t expect and that I’ve learnt since:

The crew on CV3 (our 68ft floating home for the week) was absolutely great and completely made the week. Not to forget Emily our Skipper and Paul as first mate. We were pretty much constantly laughing. Inhibitions were lost pretty damned quickly which helped, so much so we became the “party boat” out of the 2 level 1 crews sailing that week. Hilarious.

2. Lots of sweating & grinding is necessary

Not just for late nights in dodgy clubs apparently (not that I’d know – thanks Sam!). I’ve learnt a whole new language over the last week, and apparently only just scratched the surface. Luckily,  there is a large helping of innuendo with many of them so it was highly amusing for all on board.

3. I need to build some serious muscle and spatial awareness

This is mostly for the sweating and grinding (to hoist the sails!) and for lifting the very heavy sails & ropes on deck. On the command of “2, 6 heave” we managed to moved things between us, but it was seriously hard work. The Circuit training that I do for rowing paid off, but more upper body strength is required. Time to build some guns. Alongside that, the system of lines and knots needed takes some time to get your head around. Spatial awareness has definitely been improved after just one week.


4. That MK is apparently so dodgy that dangerous parts of the boats are named after it.

Boo 😦 clearly no one in my crew had ever visited properly. “But I’m not actually from Milton Keynes, i’m from a village outside it don’t you know”. I think my protests just confirmed their suspicions.

5. That you can never have too many carbs

Every single meal or break involved biscuits or pasta. Now this no bad thing, carbs being my favourite food and lots of energy being required. I am, however, looking forward to veg this week (having just had more spag Bol back on land).


6. You will be physically punished.

And not just by being made to clean disgusting bilges on the last day. Through a combination of scrambling around on deck, handling ropes and lifting heavy objects, I am battered, bruised and aching, not to mention weather beaten. My hands and knees in particular felt the strain, but quads hurting too today from all bending and lifting. Ow.

During training, I really didn’t feel hugely tired. Yes, I was weary at the end of each day, but I felt pretty chipper each morning despite some late nights. This was no doubt helped in part by my super cosy sleeping bag (still on love with it), but on reflection, I think I was running mostly on pure adrenaline. I know this because today I feel like I’ve been hit by a truck. Things didn’t stop swaying either until this evening. Positively falling asleep at my desk today despite being back on land.


There’s so much more I could and hope to write about level 1, but DOKS is compelling me to sleep. Thanks must go to Jen for the photo of me on the deck – possibly the only one of me actually doing something related to sailing!