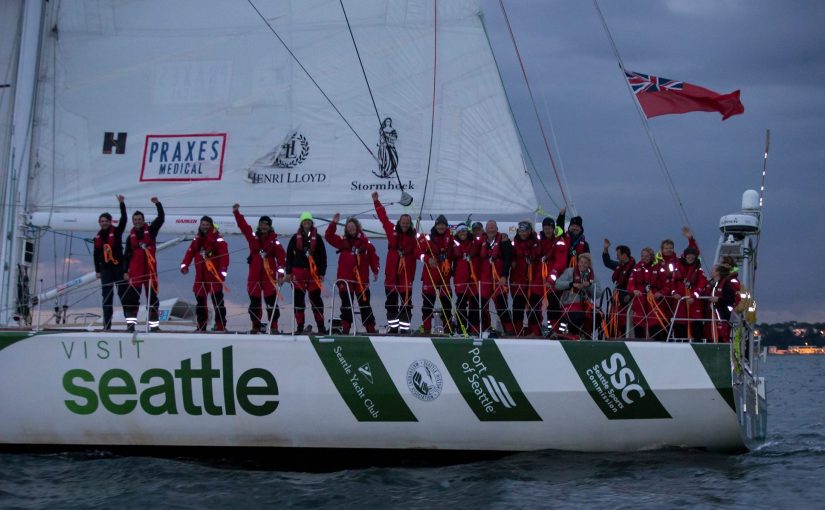 The final race from Den Helder to Southend went by in a blur.

Gone were the jokes about 5 more days: this race was going to be just 36 hours long, the shortest of the entire Clipper Race. To ensure we rested before the crazy day that would be London-arrival, the race start was planned for Thursday afternoon so that we’d finish at around 4pm on Friday; plenty of time for a sleep. The forecast was for some serious upwind sailing, so out it was with the Stugeron again. Preparing for race start this time, however, was a doddle as Emily and I had been sleeping on the boat during the stopover. No manic taxi rides carting our stuff around, we just woke up, hunted breakfast (croissants, of course) and then at 12pm we were off through the locks. Time to do that Parade of Sail malarky. As we had plenty of people on deck and the stugeron was kicking in, I took the parade of sail as an opportunity for a nap. This means I missed the military boats guiding us, missed the final views of Den Helder and probably other stuff too. Reflecting on these blogs, I seem to have slept through quite a bit of the exciting stuff on this race actually…

Any way, after parading up and down for a while/napping, our race start from Den Helder was as per that in Derry: first across the line. Alas, there were no cannons this time, but once we’d crossed the line, we jostled with other boats for position, even having to ask for “water” at one point to ensure that we weren’t grounded.

Before the race began, we all agreed that we’d adopt a serious racing attitude and make sure that we were on the high side whenever possible. At its most extreme, this resulted in people “sleeping on the rail”, aka sleeping on deck rather than in their bunk, legs over the edge on the high side. A less extreme approach was to sleep in your bunk if it was on the high side (score!), but lie in your kit rather than getting tucked up so that you could move if needed. This seemed to be a pretty sensible approach apart from the tacking: on the Friday of this race alone there was significantly more tacking than the rest of my race put together! Every 5 minutes it seemed we were tacking, making our dedicated rail-sitting somewhat challenging. It went something like this:

Everyone tries to gracefully get themselves off/ falls off from the high side into the cockpit with varying levels of success.

Each person goes to a station, one person on each of the staysail winches, yankee winches, running back stays and 4 people on the grinders as we have the majority of the crew on deck. Queue much crew-tessellation as we all try to do a job.

Tack complete, everyone scrambles up to the new high side and tries to wedge themselves in for another 5 minutes before the next tack.

Tack tack tack. So much tacking.

In combination with the tacking, a key feature of this race was that we were playing with the big boys: LMAX and Derry. These were the two premier boats, battling it out for first position in the overall race. Somehow, we managed to sandwich ourselves between them, Derry actually covering our moves at one point with LMAX chasing us behind. This didn’t feel real: surely we were actually at the back somewhere and this was some sort of portal that was letting us watch the 2 top crews battle it out. Surely?!

The proximity to Derry and LMAX made the atmosphere on board tense, everyone constantly looking out for where they were and asking how we could adjust our tactics to make up more speed. As this race was so short, the distances between boats were tiny: Derry just meters ahead. Relief was felt when LMAX managed to break their Yankee sail somehow, opening up a more authoritative gap between us and them. Derry, on the otherhand, were so close we could taste first position. So. Close.

To keep our mind off the tense situation, most of us were on deck on the high side (whichever that chose to be during those 5 minutes) watching either British coastline or Derry. With the sun beginning to set, Vernon rightly pointed out in no other situation would you be happy to watch boats for hours at a time. On the race, it was all you needed for entertainment. Well, perhaps a few more things entertained us than just that…

Other entertaining things seen on this race were:

By now late at night, we finished the race at Southend in 2nd place, a mere 29 SECONDS behind Derry. 29 seconds! We had been a boatlength behind them for a while but were unable to catch up. I was pretty chuffed though: second place meant that I would now have a complete set of tiny flags to celebrate my race. 1st, 2nd, 3rd plus Social Spirit: BAM!

With such close racing between ourselves and Derry, both crews exchanged 3 cheers after crossing the finish line. This and the preceding race were so different to the other races in that the crews were so close. Turns out seeing other boats is the motivation we need to perform well.

We were so happy coming over the finish line. To celebrate, on went the celebration playlist prepared shortly before the finish and out came the disco bulb for the motor up to our anchor point where we would set off again at 4.30am in the morning. The only shame was that most of the speakers on board had died by this point, so disco-celebrations were short. We also needed to get the boat prepped for going into our anchor point in Southend: head sails and main down, anchor dropped for the night. It was then to the bunk for a quick nap before waking up at 1.30am to do some casual anchor-watching at 2am. My final 1.30am wakeup – HURRAH!

The half hour of anchor watching quickly went by doing some exercise (I was hoping better late than never) then faffing around (maybe accidentally napping too) for a bit before waking up the next watch. They had had a couple of hours sleep so we got a couple of hours sleep before the 4.30am motor. The next day was going to be BIG.