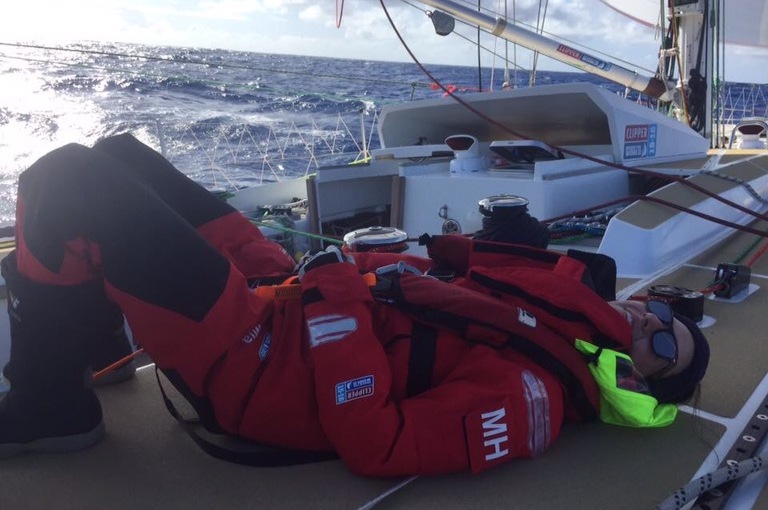 It’s 3.10am in the morning and I’ve just come down below deck. Outside, the Pacific is nearly flat, just the slightest puff of wind in the air and no stars. Everything feels like it’s matte black: with no wind, no reflection on the water, no moon and the air humid.
This first week at sea has not all been like this, it’s rather been one of adjustment. When we first left Seattle, we were soon into choppier seas as we motored out to race start at Port Townsend: an 18 hour trip from Seattle alone. The race hadn’t even started but sea sickness soon kicked in, infact I think I as the first to succumb despite the sea sickness pills. The next 2 days were not particularly pleasant. As it got a little rougher (we’re still talking not a lot of roughnes here), the sea sickness got worse. To manage this, I now carry little biodegradable dog poo bags to conveniently puke up into. I also had to retire to bed through one watch as I was feeling so rough. The up & down motion from back to front of the boat meant that I only really felt OK lying flat in my bunk. This was where I wanted to be and never leave, particularly not at 2am in the morning for a night watch.

Lying in my bunk has not proven to be as simple as it sounds as on a couple of occasions, I’ve had to cling on in my sleep whilst the boat rocks over. Normally, everyone shares a bunk with a person on the other watch, but as we have 19 crew on board, we have uneven watches. This means I am in the exceptionally lucky position of being the 10th crew member of my watch aka I have a bunk to myself. This is pretty wonderful. It does take a certain amount of ingenuity to get into my bunk though as its one of the upper ones. Currently, I cry “Ninjaaaaa”, get both feet on the wall, duck my head under the bungee line I’ve rigged up to hang my kit, get my back against the edge of the bunk and then kind of pivot myself in horizontally. 9/10 times I bang my head on the pipe casing that runs down the centre of the ceiling of my bunk. This also makes it quite tricky to take clothes on and off in it. But once I’m in, I tie my lee cloth (a cloth that runs down the edge of the bunk) to hold myself in and I’m away.

As I lie there, the boat creaks, grinds and whistles around me. I hear the other watch walking about on deck alongside the whirring of the winches when anything sail related is adjusted. Every now and then, the motion of the boat becomes more violent; my bunk angle becomes a bit more precarious as we rock over onto one side, the brief feeling of weightlessness increasing as we slam over each wave. This is when I usually tense up and wake up, fearing the the shouts I can hear above mean something serious. Often there has been a big BANG as something under tension has broken or perhaps a titanic-sinking-like groan. And then (so far only once) the “all hands on deck” call gets shouted down. The tension in me increases as I wonder what has happened; I shimmy out of my bunk as quickly as possible and then get into kit to get up onto deck (on this occasion, a spinnaker sail had popped off and was in the water). I’m not sleeping easy on this boat.

Waking up in particular has now become a horrible, horrible thing as it distorts time on this boat. We’ve been split into 2 watches doing 6 hours on / 6 hours off in the day and then 4 hours on / 4 hours off during the night. This means you have a minimum of 3 “good mornings” a day, making every day feel 3 times as long. I’ve been at sea for 5 days but it feels like 3 weeks already. Tino, a RTW crew member, jokes that we have 53 weeks to go before we get to Panama. It certainly feels that way. The watches take their toll: the first couple of days I nodded off on deck both sitting and standing. Apparently it takes everyone a while to adjust every leg.

Alongside distorting time, adjusting to the watches has made me realise how much of a morning person I am. Just being in the sun makes me feel so much better, the 2am-6am watch in contrast is an exercise in keeping my eyes open. When it’s still, I’ve taken to doing stretches and some mobility exercises on deck to wake me up more thoroughly on this watch as you tend to have been woken up from your deepest sleep. It’s quite a challenge trying to do this in my current clothing of choice though: underwear, long merino wool base layers, midlayer duvet suit topped with full foulies- waterproof salopettes and smock. on top of that. Exercise is tricky so I’m not going to be able to climb stairs in New York, let alone go rowing back at home! If no “exercise” on deck, we do usually have music on to keep us awake, even at night. This is brilliant when the stars are out (so far only 2 nights good and proper). We’re still relatively close to shore (75 miles out) but the visibility is amazing. Endless stars some nights, clouded black others.

During daylight hours, the weather has been cracking for the last 3 days (what feels like 9). We’re currently in a Pacific high which means bright sunshine, blue skies…and not a lot of wind. We’ve barely moved at times which makes for a lovely soothing experience but isn’t great for racing. We’re in 11th place already. That’s effectively last as Cljpper Telemedhad an issue with their boat before race start so are several hundred miles behind. This means they’ll be feeling the chill more than us: you really can feel it getting warmer everyday. The RTW crew have warned us newbies of the delights to come when it gets hot. I already find myself sweating a lot on this boat, particularly below deck (could have something to do with the GIANT sleeping bag I own). What’s it going to be like by week 3?!

What has been better than I expected so far are the food and the people on this boat. I was a little apprehensive in Seattle as we didn’t spend much time together s a crew, but it’s turned out to be fine. I think we’ve got a good mix of people on each watch, there is a lot of laughing and everyone has been very good showing newbies how to do things. There’s so much to remember! It’s also been intriguing to discover that the boat has its own lexicon; something that initially confused me in Seattle when speaking to the crew. Why were they speaking like that?! After 8 months together, it’s an interesting mix of of influences from around the world. So, here’s a brief introduction to the art of speaking “Visit Seattle”:

Warning: the majority of the above can sound a bit stupid in a British accent, so you’ve got to say it with confidence and add your own flare. “Chicken no bone” in a Home Counties accent rather than Bajan is probably the hardest to pull off.

I am really hoping to see a whale this leg. And what did we see today? A Shark, sea lions AND baby Dolphins! The shark was a fin, gliding through the water in a stealthy manner. The Dolphins were dolphin-like, being Dolphins. The sea lions looks totally bizarre: we couldn’t work out what they were until I saw one another time and spotted it’s sea lion head, otherwise they look like giant slugs diving through the water. Wildlife galore.