As a follower of the Clipper Race, race start has always been a bit a bit of a mystery. Following, you see the photos, you know the time when the race has begun, but the rest of it is a mystery. What comes before? What’s the build up?

It turns out that the afternoon before race start, all crew were called together for a race briefing. Sat in a conference centre, the briefing went through the race course for Seattle-Panama and Panama-New York, weather, safety, even the Bermuda Triangle. The key output of this was that Panama would not turn out to be the stopover we anticipated. The first revelation was that the race could end early. Not since 2008 had this race successfully finished in Panama. The doldrums meant that most races had to finish at an earlier, pre-determined gate with the rest of the race completed under motor to get to Panama on time. For this race, 4 gates had been set up and it was likely the race would end at one of them. The second revelation regarding Panama was that the marina we expected to berth in wasn’t complete. For one reason or another, it was likely that we would be anchoring by the canal, waiting to be called through to cross. There was a chance that we would get into port: we just wouldn’t know until we got here. So, nearly 7 weeks to New York straight it is then!

Following the race briefing, we had a crew briefing on our boat where Huw took us through what our approach to the race would be and what watches we would each be on. Tino & Jan were watch leaders. My watch was: Tino, Amancio, Dana, Rosalind, Emily, Alex, Lucy, Jon, Bob & I. We went to a nearby hotel afterwards to talk through how we wanted to act as a watch (intention: push harder than before). It was then back to Emily & I’s apartment to pack everything into dry bags, ready to be on the boat by 9am the next day.
﻿

What better way to start an ocean yacht race than with donuts at 7am? We figured the boat was going to be donut-free for the next 7 weeks, so Emily and I used this as an opportunity to pack in some tasty tasty sugar and ring home one last time. It was then to the boat in a taxi to accommodate the sheer quantity of kit we had despite it being a mere 10 minute walk away.

Once on the boat, the morning was spent doing final preparations for the race. For me, this meant filling up the water tanks using the slowest hose in the world followed by disposing rubbish whilst others stowed fresh food on board. Final coffee runs were made (this has turned out to be exceptionally tragic as the cafetière on the boat was BROKEN) team photos were taken of us in our green kit and then the processing began. We processed up high, then officially processed down to the boats following a marching band. We processed (being the home crew) holding a number 12 flag. Apparently this represents the fans for the Seattle Seahawks football team. I was just hoping that it didn’t represent our finish position.

Next up was boat processing. Each boat reversed out of the marina to their team song, we again being last. This is when the relentless waving began – more smiling and waving than I’ve ever done before. What is London going to be like?! People were lined up all along the edge of the marina and on top of the trade centre in Seattle with the water packed with yachts. Everyone was waving at us. Add a helicopter taking photos into the mix and we had to wave up as well as down and across. It was pretty cool to be fair. What followed next was a “parade of sail” where the boats all lined up nicely and went up and down the bank for a bit. A fireboat was in the middle of the course spurting huge plumes of water so whenever we passed this, the wind would pick up and the temperature would drop. Once we’d paraded up and down a couple of times, it was time for a man overboard drill and we were off. Off out of Seattle for an 18 hour motor sail to Port Townsend where the Le Mans start would be a day later. Finally, a race start where I was on the boat rather than watching it happen from afar. 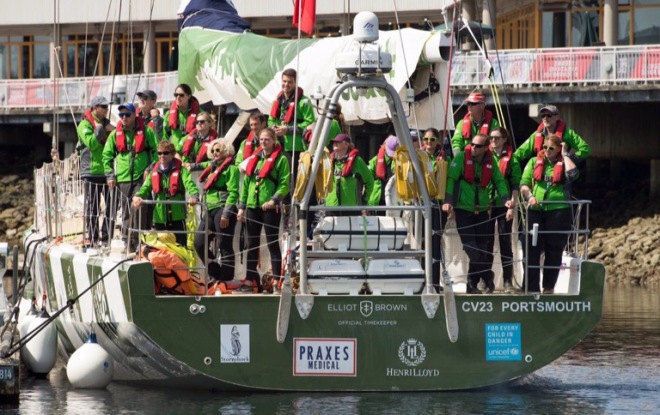