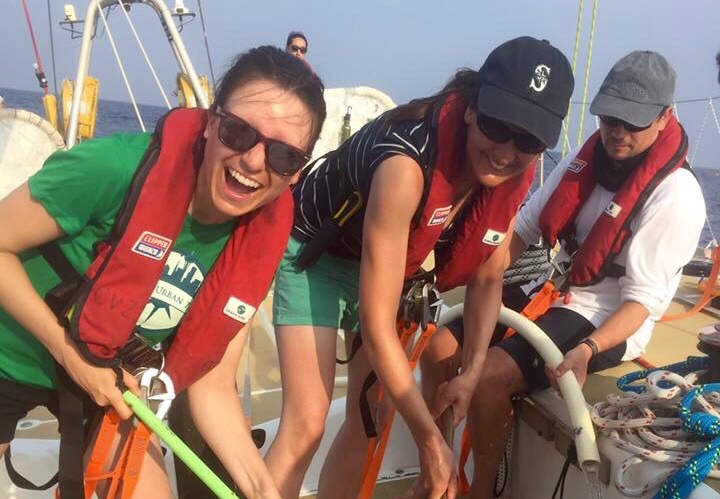 Week 3 and it’s finally hot. During the day watches, the sun spends most of its time directly overhead making shade elusive. We all literally hot-foot it across the deck as the sun heats it up to a searing temperature. On the rest of our bodies, sun cream is a mandatory otherwise burning is guaranteed, either that or exceptional tan lines. Some of the best tan lines so far involve tiger feet, deck-shoe tans and then of course, life jacket tans. I’m just working the “Siberian glow”, a term coined in honour of Lucy who is also rocking the milky white leg look. Big hats are now coming out too to protect against the sun. I was really chuffed with mine: huge and green and then poof! Off it went overboard to join the Dolphins. Sun visors only it is now then.

The heat means our life jackets now weigh heavy on our shoulders having absorbed what I can only assume is sweat. The smell is delightful (not) and to prevent chafing, most of us are now sporting rather fetching gingham tea towels as neck scarves, referred to as “sweat rags”. Lovely.


During the night, below-decks has the same heat as above but with an intense humidity. Lying in our bunks, we are all covered in sweat. Sleeping bags have been rolled up and silk liners rolled out as a token gesture. Port holes alongside each bay of bunks provide a little relief allowing the breeze to creep in if the boat is moving outside. If we’re not moving, or the portholes are closed for washing deck, you are gradually woken by the increasing humidity. Breathing becomes a bit of an effort: you try to breath deeply for some cooling relief, but all of the air is hot and sticky, just like you. Many people now take a pillow and fall asleep on the sails in the sail locker rather than stay in their bunk as the hatch is left open in there for air to circulate (only when there is no risk of water getting in of course!). There are also a couple of fans rigged up at either end of the boat to help circulate the air, but these only come on when the generator is run, approx. 5 hours a day. We’ve now been asked to preserve fuel as it gets more likely we’ll have to motor sail into Panama, so the generator and therefore fans are being run less frequently now. Crew that have already done hot legs had the cunning plan to buy USB powered fans in Seattle, so these are rigged up in lots of bunks. Everything is USB powered on here, a cubby hole at the front of the galley being stuffed with electronics on charge.

Real relief from the heat can only be found by being on deck at night when there’s a good breeze or by applying copious quantities of talcum powder to make you feel slightly less clammy (everything I own is now a dusty white). There are nights though when the humidity outside is just as bad. You come below and everything is wet so out it is with the talcum powder again. We’re still a good 10 days from Panama, so I’ve been assured that this will only get worse by RTW crew.

Wooling spinnakers below deck is particularly tough: after wrestling sails one day, I emerged dripping onto the deck, rivers running down my face, neck, chest and arms. Normally, this would immediately call for a shower (although normally, you’d probably have some sort of temperature control to prevent said sweat-fest). Luckily, Visit Seattle is a luxury yacht now equipped with a deluxe shower system. The boat has a seawater pump for scrubbing the decks, now handily rigged up at the back of the deck so every evening, there are at least a couple of people having a shower, a volunteer pumping the sea water over their heads. We hear that on other boats a bucket of fresh water for a shower following mother duty is a treat. Visit Seattle, on the other handmade is now the “Pacific Pampering Parlour” aka a 70ft racing yacht. If they created the Clipper advertising posters using shots from this leg, you’d get a rather different impression of this adventure.
After my wooling-sweat-extravaganza, it was time to get the bikini on, the scrubber out, some sea water poured on me followed by a rather warm fresh-water rinse to briefly wash the sweat and sunscreen away. The shower-fresh feeling only lasts arout 20 minutes, but it’s a pretty glorious 20 minutes. Hair washing is its own separate challenge: after washing it once 10 days in, the greasiness appears to have diminished. 10 days later my hair is now due another wash. How is that for a low-maintenance hair regime? I do brush it daily though to avoid the dreadlock that Emily had to have cut out in Leg 1. That makes it more socially acceptable…right?

The advantage of this being a hot leg means we have the opportunity to wash clothes alongside ourselves, sail ties having been rigged upon the back of the boat to dry them. After some brief experimentation, I’ve concluded that merino wins everytime in the heat so I’ve joined the washing club. In contrast to the base layers, mid layers and the full foulies of week 1, it’s now either a merino t-shirt or a sports bra on deck plus some shorts of course: it’s just too hot for synthetic kit.

Anyway, back to the HEAAAAAT. Bit of a theme going on here…

Intense heat means I can never sleep when our 6 hour off-watch falls during the afternoon. Pools of sweat collecting mean I always wake early, giving me time to write this somewhat epic blog. Already, my iPad is getting sticky as I’m writing this and I am covered in sweat in my bunk – yuck.

The heat has its blessings though. The day watches are beautiful: blue up above, blue ahead
and all around. The sky is often cloudless and sitting at the bow of the boat (the front end) all you can see ahead of you is blue. Looking back from this point, you get to see the boat behind you in its entirety and are reminded what you’re sailing on. It’s easy now to forget that we’re on a 70ft yacht. Sitting on deck or being in your bunk has become so normal that having a view of the full boat is a great reminder of how unusual this is. More importantly, I also saw dolphins playing around the front of the boat whilst I was sitting up front alongside a speedy turtle passing by. No whales yet though. Heeeeere Whaley Whaley whaley…

In sailing news, we’re now heading east to curve around towards Panama as we’d been taking the off-shore southerly route until now. Spinnakers, white sails and the wind seeker have all been out but infrequently changed due to light winds during this week. This means whole watches can go by on deck with nothing to do except talk, contemplate and perhaps snooze. Often, you’ll come onto deck at night to find bodies everywhere, sleeping forms suggesting a massacre. Otherwise, there might be music playing accompanied by the soft chatter of mixed conversations as the prior watch linger on deck, reluctant to head into the inferno below. The stories of being on the same tack for a days are true: it’s very, very pleasant but it becomes quite a shock when we actually have to do something. In the pursuit of activity, the daily deck wash now becomes something to look forward to to get some exercise. With so many snacks around, calories out are definitely not overcoming the carb-rich calories coming in. Having said that, the warm weather has come as a welcome relief to crew that were on board for Leg 6 where it seems a tonne of energy was used just keeping warm. Not a problem this leg!

A highlight of this week has been the Ocean Sprint: we did some slick sail changes and helming and beat the nearest boat by 2 hours, completing the sprint in a cheeky 10hrs 1 minute. Chocolate-coated cherries from our sponsor in Seattle were cracked out to celebrate our win of this – a first for Visit Seattle. That’s what you get for going directly south during a sprint. This should mean we’ll get a valuable 2 extra points for this race: every little helps to stop us from being last overall!

A crew of 20 people means that mother watch falls every 10 days for each of us, so this week, Vernon and I were back in the galley together cooking up a storm. This proved to be more of a challenge in remaining hydrated than cooking, sweat pouring off us all day (nice). After all was done, we cooled off on deck in the evening, Dana providing entertainment having eaten too many chocolate cherries and so becoming a Caberet act. I was happy to assist by providing a spotlight above her. The height is coming in handy every now and then. Also entertaining has been the allocation of nicknames to new crew, Dana (“Hobbits”) coming up with some corkers. My favourites are: “Koala” for Jon (because he keeps falling asleep in deck, cosy in his eucalyptus tree), Vern-Diggidy-Dog for Vernon (just because) and Buttercup for Lucy (following evidence of her dedication to Reese’s Peanut Butter Cups). My name is Bubbles, to reflect my personality. I think it’s rather nice but with such a snap-tastic name as Mia, I’m not sure it will stick.