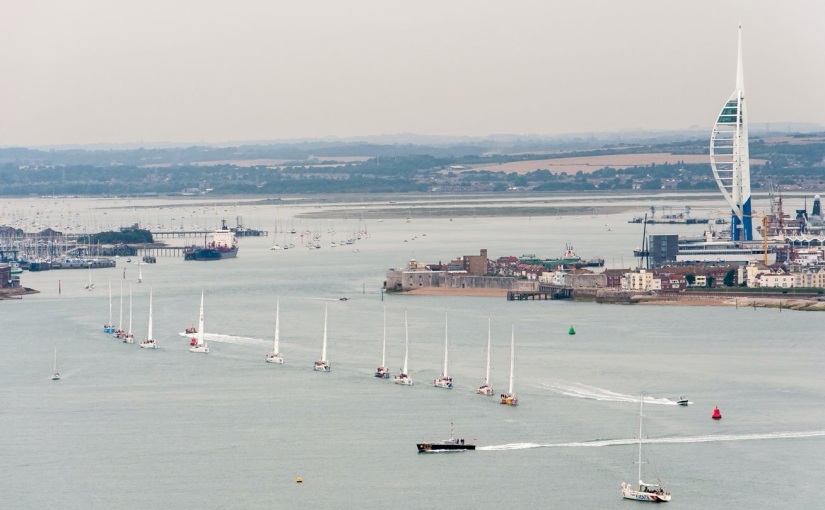 Last week, it’s took me 4 days and 7 different modes of transport to get myself home. To be fair, it was 287 miles (as the crow flies). I did also get to take in the Isles of Scilly, various stations, Gosport and Old father Thames along the way.

A pretty exciting beginning to this trip. After a weekend in the Isles of Scilly, I crammed myself into a tiny plane along with 4 other tourists to get back to the mainline. Although only 11 minutes long, the flight was very exciting: you could see through the front of the plane and I was chuffed to fly over the FastNet yacht race too. Only catch was realising that Cornwall is actually really rather far away.

I’d naively assumed that south coast of the UK, everything is really close to each other. There’s a reason I didn’t continue geography past 14.
Turns out Gosport is a long way from Lands End.

With our flight landing at 2pm, there was no way I was goin to get to Hosport for the 5pm delivery arrival time. And rightly so, there was no way my boyfriend should have to make a 3 hour diversion to take me there. Cue a long train journey from Exeter to Porstmouth via salisbury. The result was a somewhat later arrival into Gosport culminating in the galley seats as a bunk for me as all the proper bunks were full. Cue hot bunking for the rest of the week.

Tuesday: Gosport to somewhere in the English Channel.
Farewell Gosport my old friend. After 6 months of visiting the place, this may be the last time I see GosVegas.

All 12 yachts set sail at 10am to deliver the boats to London. Settled conditions and some warm-up Mexican waves sailing out of Portsmouth made for some rather pleasant sailing.

In contrast to level 4, we weren’t racing this week, we were merely “delivering”. This meant a pretty straightforward sail around the south coast, punctuated with some comedy media moments.

Whilst the rest of the crew race the world, I’ll be looking after media on shore (follow us @VisitSeattleRTW). This will become a distinctly off-shore role during Legs 7&8, however, so it was time for Ana (our crew media champion) and I to get some practice in with the shiny new cameras we have to record the race.

A very camera shy crew meant we media team mostly ended up interviewing ourselves. Despite this, we got some great little interviews. Saturday Kitchen Live is also going to be given a run for their money with “The Sunshine cafe with Mia & Leo”, created whilst on mother duty cooking pasta. This was followed by Sail Storytime with Karri. Think we were all perhaps a little over-tired.

Wednesday: somewhere in English Channel to Margate.
Day 3 brought a lot of time on engine and a lot of time at anchor. After sailing through the night, we arrived outside Margate where we anchored for to wait for the other yachts to arrive.

This gave us all some time to use. Cue lots of rope work, prepping new ropes to be rigged etc. Having hot bunked, I seemed to miss a fair chunk of this having not been woken up in my port side stealth-bunk. I did make myself useful though by cracking out the media kit and buffing up on interview techniques. Ana and I even got a crew blog done. Wonderful.

Thursday: Margate to Buckinghamshire via St Katherine’s docks, London.
A long, slow, engine-tastic day but what a place to sail into!
More media action was had on this day as we motored up the Thames in convoy, a beautiful procession of Clipper yachts. As we approached the city, we were informed that the crew had to all be matching. Frantic kit finding began as we all searched for matching items. Matching kit also meant the perfect excuse for crew hairstyles and crew facepaints done with style by Emily. This was enhanced further by diamantes for team media (critical piece of sailing kit).

When we finally entered St Katherine’s docks, it all became rather real. All of the yachts lined up in their finery, ready for the open week to come. Alas, it was only half an hour on deck before I had to scoot off for the final part of my journey: the train back to MK. My boyfriend was delighted to find me in the same clothes I had last seen him in, but all in all, a cracking way to get home.

It was great to get the chance to sail our boat into London with more of the mighty Visit Seattle crew. The next time I sail on CV23 (our yacht) now will be in April. It’ll be an even longer journey home then: 12,000 miles from Seattle rather than 287 from the Scillys.