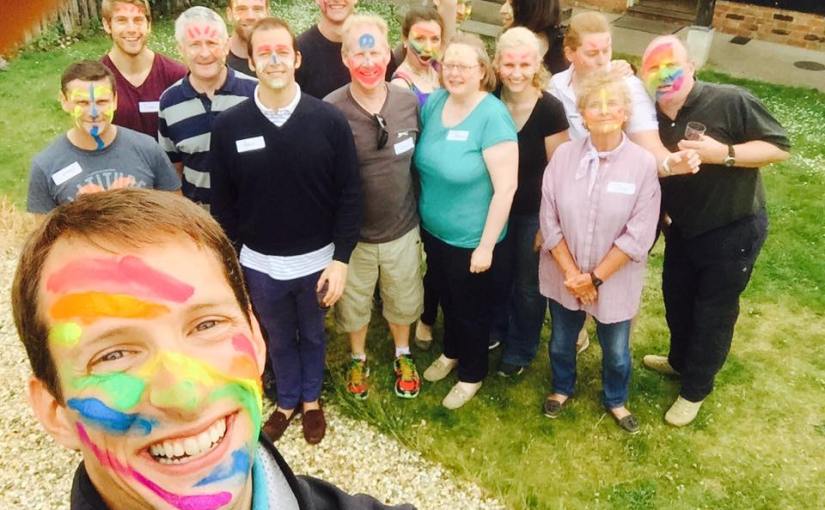 A mere blogette, but for all you Team Huwers, here’s the write-up from this weekend.

19 crew members arrived from across Europe at a farm in the “Garden of England” prepared for a weekend of getting to know each other, but perhaps not the chicken-stalking, owl-hunting, pond-dipping and face-painting that ensued over the 2 days!

The event kicked off with a scavenger hunt around the farm. Challenges included getting up close and personal with some feathered friends to capture a “Chicken selfie” followed by a “Clip-On” challenge. Mini-teams of 3 had to clip-on and navigate obstacles across the farm, the final challenge being to see who could paint their faces the most creatively. 20 minutes later and everyone was working the neon look, Skipper included!

The fun continued into the night aided by a BBQ and Stormhoek wine – a heavy helping of drizzle included to give create an authentic British experience. We also sorted some very serious team issues: the team song. After the original team song was nabbed by a rival crew, it was up to the Kent contingent of Team Huwers to listen to many of the remaining 55 songs and come up with an alternative. Much debate and the odd bit of dancing later and business was concluded in favour of the pub where conversation moved onto superheroes and spanish ham. Everyone in the team is now looking forward to what Victualler Amancio has in store, particularly the potential for Jamón the boat (not Jambon as I previously spelt it. Oops). Quote of the weekend had to be from from one crew member who shan’t be named: “I’ll go commando if it means we can have Jamón on the boat!”

After a night in bunks (the sleeping platform of choice for Clipper crew members), the morning was dedicated to getting to know each other even better than a few glasses of wine could facilitate. Joe lead a team session to help us identify the strengths of each personality type in the crew to understand each other better on the boat. We then soaked up the sun strolling around Doddington Hall gardens where botanical knowledge was shared, owls were spotted and even ponds were dipped. All this fresh air helped everyone work up an appetite, so it was off to the local pub for roast before leaving our separate ways, all agreeing that it had been a great weekend.

As crew member Mia Hartwell summed up (OR ANOTHER TEAM MEMBER – VOLUNTEER PLEASE!) “It was brilliant to have the opportunity to meet so many of Team Huw and the coordinaters did a cracking job of organising such a fun event. Everyone really got involved and it’s nice to finally put some faces to names!”